I was a victim of a ladyboy pickpocket last Thursday night about 9:30 PM between the Westin and Robinson's on Sukhumvit. I was walking along and suddenly she pops in front of me, quickly pulls out her left tit from the red dress she was wearing, grabs my hand and places it on her breast and demands I go with her! Quickly in my attempt to push her away she had her other hand in my back pocket extracting my wallet. As I immediately realized what had happened I turned around to grab her and in her defense she dropped it and was very apologetic. Momentarily in my fury I was going to take this further, however I realized 3 Thai guys were casually standing around close by and decided that she was not alone and kept on walking with my wallet in tact.

As I approached Robinson's I saw a policeman standing outside and informed him what had happened 50 metres up the road only a minute earlier. To my astonishment his reply was "Ladyboy just do her job. You must to be more careful. Go police station speak them!" I asked him what he was going to do about it. "Mai pen rai, mai pen rai" he replied and walked away! I have been coming to Bangkok every 3 or 4 months for the last 10 years but I have never felt so uneasy walking around Sukhumvit as I felt during my last trip. Things are certainly changing for the worse.

Another Report:
Last night I was walking from Soi Cowboy towards Robinson's when I spotted 2 ladyboys and about 4 Thai boys hiding in the shadows next to the BTS stairs. The ladyboy made a hand signal to the young Thais and positioned herself to intercept me. It was a trap. Fortunately I was sober enough to see what was going on and quickly moved my wallet to my front pocket. The ladyboy saw me do this and gave a smile to the Thai boys. At this point I reversed course, jumped back 3 feet, and stepped out into oncoming traffic....

emails recently sent to Stickman
Posted by ArtTv at 11:59 AM No comments:

Songkran Coming Up in Bangok, Thailand 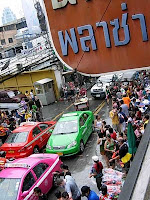 April 13 thru April 16th or so, Songkran will take place. Water fights, super water pistols, etc. If you like girls in wet tee-shirts, its the place for you. Both the streets outside Nana Plaza and at Soi Cowboy will be battle grounds. (Be aware of possible dirty, unhealthy water.)
Its all in the name of celebrating the Thai New Year. 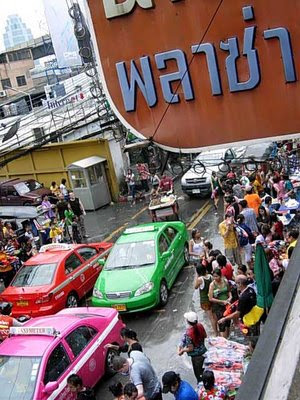 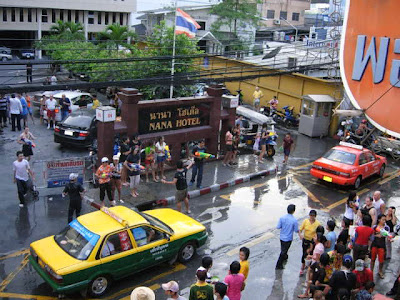 (photos from Big Mango archives)
Posted by ArtTv at 3:48 PM No comments:

Soi Cowboy at Night by LaPalme 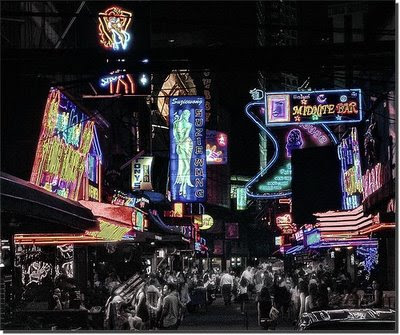 Michael seems to enjoy the colors of the neon at Soi Cowboy, but the people are black and white. Enjoy the scene Michael, the people are just as colorful as the neon, unless you get burned out on the whole thing. Keep up the good work Mike, still waiting for that image of a gogo girl dripping wet from the rain.
More of his work at: Michael LaPalme.
Posted by ArtTv at 4:58 PM 2 comments:

Bill's Updated Impression of the Front of Nana Plaza 3-09 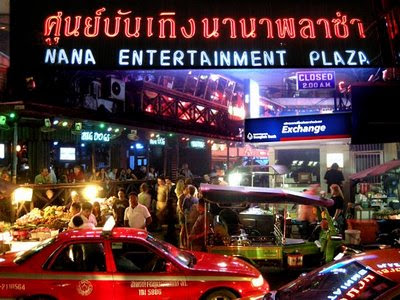 The human zoo that is the area in front of Nana Entertainment Plaza can only be partially captured on camera - the rest will require witness; as taxis and tuk-tuks nudge their way into the street-crowd to pick up and drop off the flux of nightcrawlers. Food and insect sellers vie for space with bikini and toy vendors on overcrowded sidewalks, as buy-outs on the arms of their johns, thread past, heading for nearby short-time hotels. Transgenderite whores mingle with the usual crowd of street hookers as the night heats up. Children selling roses and mali garlands tug on shirtsleeves like puppies on your cuff, while Surin elephants and their mahouts wander through it all, begging.
Read more and get an updated map of Nana Plaza at Bangkok Eyes.
Posted by ArtTv at 4:13 PM No comments:

Soi Cowboy Has A Circus Feel


The elephants, the lights, the street food vendors; its like a circus atmosphere. Welcome to a walk down Soi Cowboy at night.
Posted by ArtTv at 3:06 PM 1 comment: 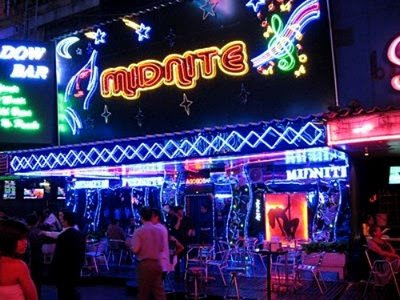 The crew of girls at Rawhide looked pretty much the same as before the fire. I saw Na, the first girl I ever barfined from Rawhide, who — three years later — has the same beautiful smile, great attitude, voluptuous body and lovely skin that first attracted me.
Also present was the girl I often think is the sexiest go go dancer in Bangkok — Kung. I bought her a drink, put my hand on her thigh for a few minutes and, since she was sitting at my table topless, used both hands to check whether her left and right breast were the same size. The initial test was inconclusive so I checked several times. I believe I’ll have to check again next time in.

My mate and I decided to make one more stop, and agreed on Midnite Bar. I seem to be the only commenter on the internet that likes this go go, but I have a good time every time I go there.

Somehow, over the past four years they’ve managed to keep the place stocked with young and slender 40 kilo girls with perfect little titties with brown pointed nipples… just the way I like them. Every dancer on stage at Midnite was topless, and they had just a gauzy little skirt with no panties, so there was nothing left to the imagination.

Werewolf
Posted by ArtTv at 11:45 PM No comments: 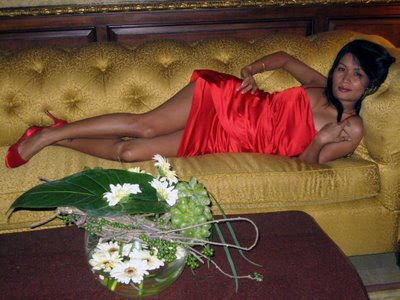 Dean Barrett found this Mojo dancer in the Oriental in Bangkok.
Click here for more shots and comments from Dean.
Posted by ArtTv at 10:46 AM No comments:

Sheba's is Fun and Friendly 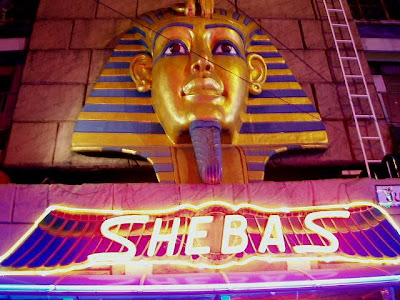 Sheba's in Soi Cowboy is heaps of fun at the moment with a lot of pretty ladies. It's all go from early in the evening. Where the attitudes are sour in Shark, the bunch on stage in Sheba's are fun and friendly. These things usually come back to the mamasan and the management - the bars with the prettiest girls aren't necessarily the most fun.
Stickman

(photo from Wicked Traveler)
Posted by ArtTv at 9:13 AM No comments: